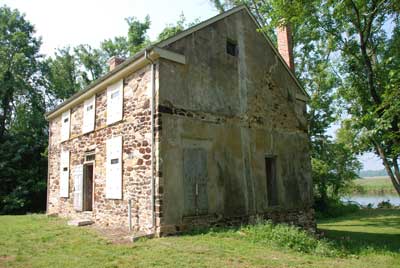 Stone House at Elk LandingThe land occupied by today's Elk Landing was initially given by Native Americans to the Swedish settlers in the area for the construction of a trading post in 1655, but it would not be until 1690 that Swede Jon Steelman builds a trading post on the site. In 1735, Zebulon Hollingsworth Sr. begins to purchase the land owned by Steelman and names the location Elk Landing Farm. Zebulon apparently operates an inn or tavern on the property serving those shipping goods through the Elk Landing area. Zebulon Sr. dies in 1763 and ownership passes to his son Zebulon Jr. 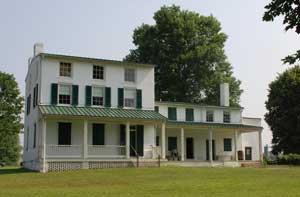 Zebulon Hollingsworth House at Elk LandingFollowing the war, business continued to be good at Elk Landing and Zebulon Jr. built the Stone House that still stands on the property to act as an inn and warehouse for the travelers and their goods coming through the port at Elk Landing. Trade through Elk Landing continued to expand and around 1800 Zebulon Jr. built the current house that stands on the site. The house was originally constructed as a two story structure in the federal style. By 1810 Elk Landing had become the principal port for moving most commodities from Cecil County and for goods traveling to and from the north to Baltimore. 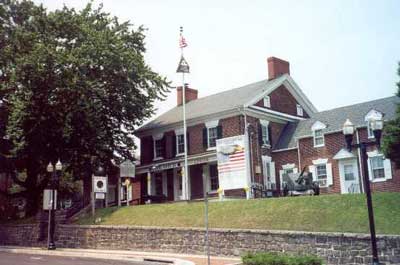 Partridge HillThe home of Col. Henry Hollingsworth, grandson of Valentine's son Henry. Col. Hollingsworth served in the revolutionary war as the Deputy Quartermaster General for the Continental Army and was responsible for provisioning the army from the eastern shore areas. The house was built around 1760 and was one of the first homes in Elkton, MD. It was occupied by Col. Hollingsworth and his family till his death in 1903, when it passed to his descendants. The house today is an American Legion Post.