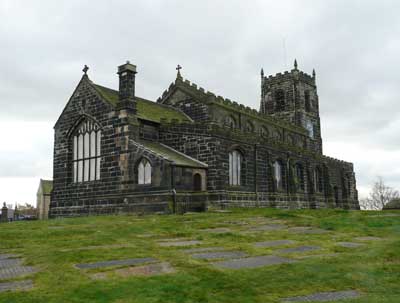 St. Michaels & All Angels Church, MottramThe name "Mottram" is thought to be derived from an Anglo-Saxon word meaning "a meeting place", possibly in this case "a crossroads". A church has stood on War Hill since approximately 1250 A.D., though the precise date of its foundation is unknown. The site was chosen after a fierce struggle between Norman and Saxon forces in which casualties were heavy.. The fallen were buried on the hill, and a place of worship was erected to mark their memory. Probably the first church was a wooden structure, replaced later by stone.

Recent research indicates that Mottram was the center of a large Anglo Saxon estate. In 1066 it came into the ownership of the king, William the Conqueror , and by 1086 it had become part of the lands attached to the new Earldom of Chester. Mottram is mentioned in the Domesday Book but there is no reference to a church.

Evidence of a church at Mottram comes in the first quarter of the 13th century when clergy attached to Mottram church were witnesses to local documents. Later, in 1252, Robert, parson of Mottram, is recorded as being fined for helping poachers and 1291 the church was mentioned in the papal taxation of that year.

Mottram's clergy were in those early days rectors, appointed by the lord of the manor through his "right of advowson". Many of the early rectors were absentee pluralists who held many benefices and left the work to local curates. On the creation of the new Diocese of Chester by Henry VIII in 1547 the bishop became rector, and still to the present day appoints vicars to run the parish on his behalf. 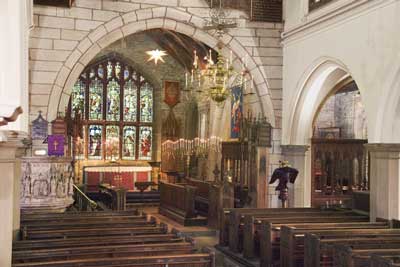 Interior of Church at Mottram     The early churches were estate churches, each built by the lord of the manor for himself and his tenants. They would have been small simple structures. There is little left here of any earlier building, only the Norman barrel font, the initials of a Hollingsworth over the north door, the Decorated capital and the effigy of a knight and his lady in the Staveley chapel, and possibly the chancel arch.