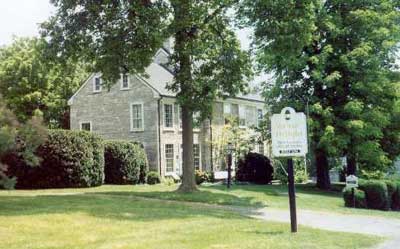 Abram's Delight, Winchester, VA     "Abram's Delight", located at 1340 S. Pleasant Valley Rd in Winchester, VA. Abraham Hollingsworth (of Thomas of Valentine) was an early settler in the Winchester area. He found the Shawnee Indians camped beside a bountiful spring and declared the property, "A Delight to Behold." He claimed 582 acres and paid the Indians a cow, a calf, and a piece of red cloth. He built a log home and mill beside the spring and brought his family from Cecil County, MD. Abraham's son Isaac built the stone house. The Hollingsworth-Parkins-Smith Cemetery is located on Jubal Early Drive, where many of this branch of the Hollingsworth's are buried.
Tradition has it that Abraham purchased his land three times - first from the Shawnees for a cow, calf and a piece of red cloth. Then from Alexander Ross, an agent for the king, and finally for a further sum of money to quiet the cries of Lord Fairfax. Abraham's father, Thomas, was killed by a buffalo in 1733 while hunting with his son Abraham on a prairie west of Winchester near Little North Mountain. Abraham bought 582 acres and by will dated 23 Sep 1748, recorded in Frederick County, VA, 1 Nov 1748, he disposed of 1232 acres of land. His son Isaac inherited a part of the homestead.