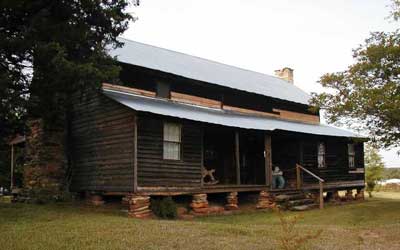 Ft. Hollingsworth    The town of Hollingsworth is located in Banks County (previously Franklin County before 1818 and Habersham County before 1858) in the State of Georgia. The post office of Hollingsworth was granted in 1838, a few hours before the city of Chicago, Illinois.
Located 2 miles south of the town, Fort Hollingsworth was built in 1792/1793 by Jacob Hollingsworth and William Wofford. The first settlers of Franklin County were granted land by the State of Georgia under the impression that these lands were located south of the agreed Indian boundary line. They found that this area actually was located north of the boundary line of the Cherokee nation when it was surveyed.
This was a wild frontier at that time and Ft. Hollingsworth was built to help protect the settlers from Indian attacks.
Jacob Hollingsworth moved to Franklin County, Georgia from North Carolina a few years after the Revolutionary War. The Hollingsworth Fort was a part of the Defensive Plan for the Western Frontier and appeared on this map in 1793. The Indians yielded a strip of land 4 miles wide and 23 miles long (called the "Four Mile Purchase") in 1804.
I visited Ft. Hollingsworth about a year ago and was amazed at the condition of the old fort. Briefly, the old fort was purchased in 1861 by John Lane. John Lane went off to war and was killed in Tennessee in 1862. His estate was settled and was given to John's sister, Katherine Lane White. An addition was built on to the fort in the 1860's and became their home. The descendants of the White family own the old fort to this day and have kept it pretty much as it was during the 1860's.
I was fortunate to meet and visit with Willette White Mote, one of the current owners and toured to old fort. She is a delightful person and seemed to be thrilled at having a "real live Hollingsworth" visit her former home (she was born there). If there had been a red carpet, I believe it would have "rolled out" for me. 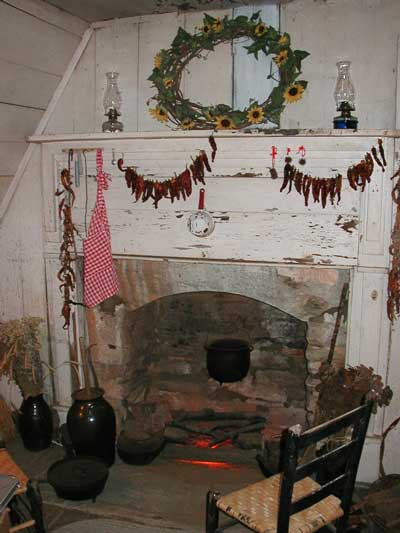 Fort Hollingsworth Fireplace    Willette proudly showed me the very earliest portion of the old fort that was built by Jacob Hollingsworth. The hand tooled large stone over the fireplace was amazing. We traveled up the narrow little stairs to the second floor of the original 1793 fort structure. The open beams of the roof were attached by wooden pegs....all hand made in 1793. The large rectangular log wall beams were "chinked" by the same white mud that had been there for over 200 years. I peered out of the small square openings where anxious settlers once watched for hostile Indians many years ago. It was a treat!
"A Day at the Fort" is held annually, in May, on the Saturday before Memorial Day. Fort Hollingsworth was placed on the National Register of Historic Places as being significant to the State of Georgia in 1998. Friends of the Fort, a non-profit, tax exempt organization has been established to operate and restore the fort.
According to information that I have been able to find, Jacob b. 1742 was the son of Samuel of Samuel of Valentine Sr. and later migrated from Georgia into Mississippi and possibly up into Tennessee.