Before he emigrated to America, Valentine Hollingsworth was born and lived in what is today Northern Ireland, a part of the United Kingdom. His home was in Ballymacrandal, a small township just east of the Portadown, in the parish of Segoe, County Armagh. Valentine purchased 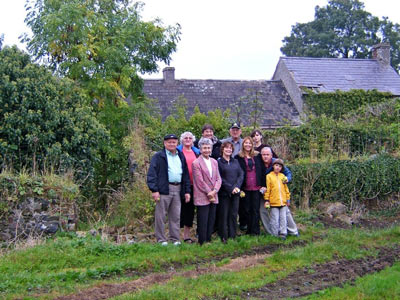 DVHSS Group at BallymacrandalBallyvickscrannell (as it was then called) from Michail Harrison.  The 120 acres were deeded to him on Aug. 22, 1664. The townland of Ballyvickscrannell thus became his farm by title. The photo at left is of a DVHSS group that traveled to Northern Ireland and is standing on the property once owned by Valentine (the house in the background was built long after Valentine sold the property and left for America).

In the 1660's he became a member of the Quaker Lurgan Monthly Meeting. Valentine was persecuted for his beliefs at least eight times from 1672 to 1681, often being forced to pay a tithe to the Church of Ireland even though he was no longer a member of that denomination. Like many of our forefathers, he left for America in search of religious freedom where he could practice his Quaker beliefs without fear of persecution.