The origins of the Descendants of Valentine Hollingsworth Senior Society (DVHSS) began with the planning of a reunion. In the winter of February 1992, three descendants of Zebidee Hollingsworth4, son of Jacob3, son of Thomas2, son of Valentine, Sr.1, met in Winchester, Va., to plan a Hollingsworth family reunion in the summer of 1992. They were Lynn Doughtery of Charles City, Va., Michael McKay of Winchester, Va., and the writer Rosemary Smith Stout of Virginia Beach, Va. The site of the reunion was planned to be on the grounds of Abram's Delight and the date 11 July 1992.

The first concern was the compilation of a list of descendants to contact. This was done through names known to them plus the register of descendants 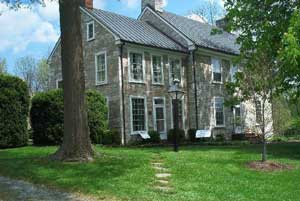 All of the planning was carried out prior to email, texting, printer-copiers, etc. Therefore, it was somewhat time consuming as our invitations and all handouts had to be typed on a typewriter and printed on a copier. Sounds primitive, doesn't it?  Attendees were requested to bring picnic food, and picnic tables were set up on the grounds. A canopy was donated by a local funeral home. A fee of $5.00 was charged each family. This was to cover mailing, soft drinks, paper and plastic supplies, the photographer, and a port-a-john. We were optimistic in figuring that if 25 showed up, we might break even. The committee was thrilled  when 180 showed up, and we had collected more than $700.

Abram's Delight was closed to the public, and tours were conducted on the hour. It was "jammed" with not much room to move. The gift shop sold out. A tour of the Parkins/Hollingsworth/Henry Cemetery on Jubal Early Drive was also offered. The land for the cemetery had been donated by John Parkins about 1825 to the Hopewell Meeting. Many Parkins, Hollingsworths, and collateral lines are buried there.

A business meeting was held and plans made for a 1993 reunion in Winchester, at which time a society would be organized, officers elected, and a constitution and by-laws considered. During the meeting the eldest and youngest descendants were recognized, the youngest being of American/Vietnamese descent. One person in the meeting called out "Only in America."

The headline in the following day's Winchester newspaper reported "A First Family on a Grand Scale." We had achieved a great success and were all very proud of our Hollingsworth heritage.

Since that first reunion, the  DVHSS has continued to reach out to Hollingsworth cousins and related families with the goal of promoting historical, 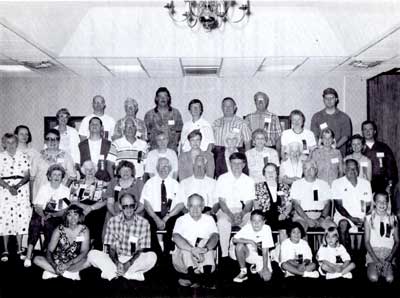 1994 DVHSS Reunion educational, and genealogical research of its members as well as preserving family memorabilia. The Society has continued to hold annual reunions in many different locations across the United States in locations that are significant in Hollingsworth family history.

The Society published its first newsletter, The Hollingsworth Heritage, in 1993, and continues to publish quarterly newsletters covering Society activities, Hollingsworth history, genealogy research, and other programs. The Society supports an extensive DNA research program that has enabled many Hollingsworth cousins to be able to verify their descendance from Valentine or other early Hollingsworth ancestors. It also provides annual support to a number of historical sites around the country with Hollingsworth ties.

In addition, the Society is actively engaged in efforts to find and protect Hollingsworth family artifacts and documents. A recent example is the 1840's quilt from Maryland that was sewn by Hollingsworth women. The quilt was provided to the Elk Landing Foundation for display at Zebulon Hollingsworth's historic home in Elkton, MD.

The society is  actively documenting the military service of Hollingsworth men and women, with a goal of ensuring that their service is acknowledged and that their experiences are preserved for future Hollingsworth generations. The organization also maintains a web site (www.dvhss.org) to share society information among members and with interested members of the public.

The Society has been privileged to be served by numerous Hollingsworth kin in positions of responsibility over the years. The first president of the organization was Colonel Robert S. Coleman (Ret), who served the organization with distinction for its first five years. He was followed in the post by Joan W. Woosnam. who served in the position for the following five years. Our third President, Carey Hardy, served in the role for four years and continues to serve and guide the organization today in the Past President capacity. Our current president is Dr. Jo Hollingsworth, who has served the organization in that role since 2007. Numerous other Hollingsworth cousins have served in other officer and director positions, all working to continue the work of the society started back in 1993.