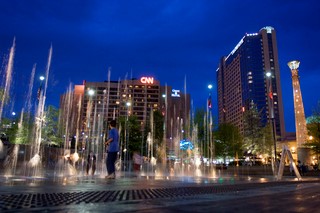 The 2016 Hollingsworth Reunion  was a four day event  held from Wednesday April 20th through Saturday April 23rd, centered on the beautiful city of Atlanta, Georgia and a region rich in Hollingsworth history. Reunion activities kicked off on Wednesday morning when our early-bird members took a three-hour, guided bus tour of Atlanta. After lunch at the CNN Food Court, most of the members of the group chose a museum for their afternoon 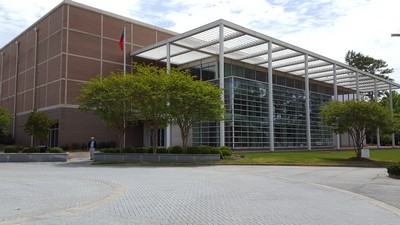 tour, including the Georgia Aquarium, the Center for Civil and Human Rights Museum, the Centennial Olympic Park, In Studio Tour at the CNN Center, the College Football Hall of Fame and Museum, and the World of Coca-Cola. Some also took advantage of the Georgia State Archives, located justdown the road from our hotel, to do some genealogy research. The archives is a treasure trove of information regarding early Georgia history in a state where researchers often face challenges resulting documents lost in court house fires before, during and after the Civil War. On Wednesday evening, members were on their own to sample some of the exellent restaurants that wee in the area of our hotel. 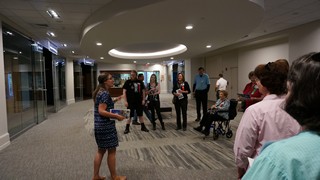 On Thursday our group opened the Atlanta History Center and was given a 90-minute guided tour of “The Turning Point: The American Civil War.” We were priveledged to have an excellent guide who pointed out a number of unique items in the Turning Point exhibit. These included the flag that flew over Atlanta when captured by General Sherman's forces and one of the supply wagons used by Union forces that captured the town. The History Center includes a number of other interesting exhibits and members had the opportunity to visit those as well.

Our band was then treated to a delicious light lunch in the formal BelleNita Room of the Swan Coach House, located on 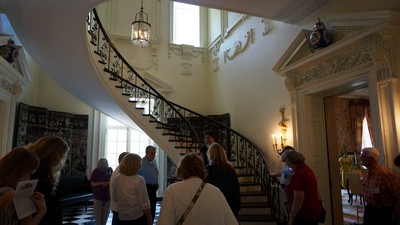 the center’s grounds. Next stop was a guided tour of the Swan House, a 1920s Atlanta mansion, located down the hill from the Coach House. It is preserved as it was in the 1930's and the tour was provided by a guide costumed in 1930 era fashions and who provided insight into the life of the Atlanta rich and famous in the 30's. Also of interest is that the house was a movie set for one of the recently popular Hunger Games movies.The remainder of our time at the center’s main campus was spent wandering the gardens or visiting other exhibitions. Our finale for the day was a guided tour of the original Margaret Mitchell House (author of Gone With the Wind), which was done exceedingly well. 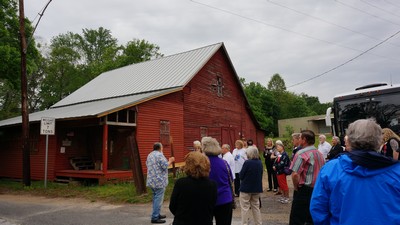 Friday’s first stop was at the Rex Mill in Rex where Jerry and Gayle Beddingfield greeted us when we departed our bus. Jerry took us through the mill’s history from its construction in 1835 by Isaiah Hollingsworth to the present. While the mill, listed on the National Register of Historic Places, is no longer functional, many area residents still remember it in the days when it functioned as a grist mill for local farmers. The Beddingfield’s are working hard to repair the mill and bring it back to life. Their warm hospitality made our departure difficult.

The Smyrna Presbyterian Cemetery (SPC) in Conyers was our next destination. We were met by a dozen 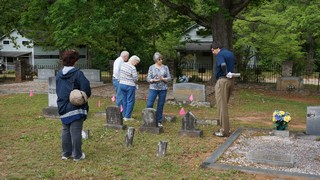 members of the SPC Trust who had flagged all of the Hollingsworth graves. In addition to their heartfelt welcome, the group offered help locating our ancestors. Our gracious hosts even passed out water bottles to those needing refreshment. The attention to detail by our hosts made this stop memorable. 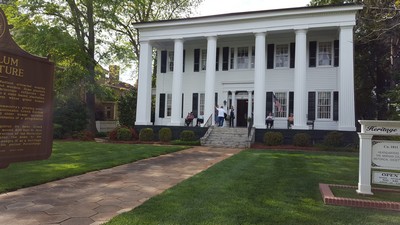 Our group stopped for lunch at the Monastery of the Holy Spirit and visited the Abbey to hear the Gregorian chant. Traveling east, our merry band was treated to a guided bus tour of Madison, “the town Sherman refused to burn.” The tour included stories of the Southern antebellum homes and their residents and a tour of Heritage Hall. This Greek Revival style home was built in 1811 and served as a private home for multiple families through 1977 when it was gifted to the local historical society. The home is decorated as it would have been in the 1800's and provided members with a feel for life during that period. An exquisite buffet at the Blue Willow Inn on the journey home completed a long day for our weary travelers.Everyone was encouraged to consider eating desert first so as not to miss the Peanut Butter Pie for which the Blue Willow is famous.

Saturday was our “Day at the Fort", and our day could not have 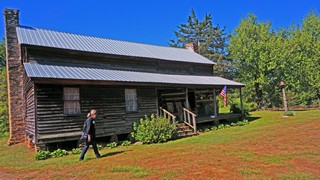 been better. Fort Hollingsworth, which was built in 1793, is the last surviving fort on what was at the time of its erection the Georgia Western Frontier fort. Due to a mistake in the initial boundary survey, the initial settlers in the area learned too late that they were actually on Indian land, and the local Native Americans were not happy with their presence, often raiding the settlers. This necessitated the building of forts until a new treaty could be settled that finally secured the land. 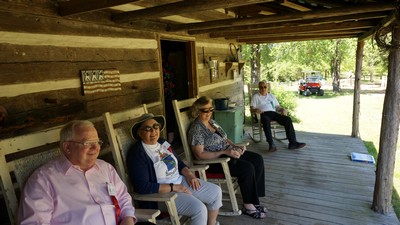 The weather was marvelous for our visit, and the costume portrayals by the Northeast Georgia History Organization were wonderful. However, best of all were the Hollingsworth relatives that welcomed us. A tasty Southern barbecue completed the perfect afternoon.

The day concluded at the historic Wayman Hollingsworth House in Fayetteville, where Angela Pendleton of the Fayette Co. Historical Society spoke to us on Fayetteville history. The DVHSS annual meeting after a catered dinner put the final touches to the week.