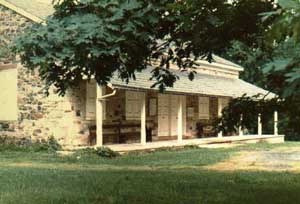 The 2013 reunion was held in Harford County, MD, and  highlighted our Quaker heritage. The reunion was held in conjunction with the 275th anniversary celebration of the Little Falls Quaker Meeting. Many Hollingsworth ancestors were members of this Quaker group and the reunion  included a tour of the house of one of those Hollingsworth ancestors, in addition to other tours of Quaker sites in the local area. That all happened after our morning business meeting on Saturday, June 9th.

The first day of the reunion (June 6th) featured a tour of sites in Delaware, providing first time attendees a chance to see some of the key sites in the life of Valentine Hollingsworth and his family. This included a visit to Newark Union Cemetery, where Valentine and his second wife are buried, and a trip to Elk Landing, the Hollingsworth family site of key strategic and economic importance during the Revolutionary War. The trip  also provided a first time opportunity to see the 1699 log cabin home of Valentine's son Thomas, enclosed within a beautiful contemporary home in northern Delaware.

The second day of the reunion  featured a tour of Baltimore's Inner Harbor area and a visit to Ft. McHenry. Attending this year was especially meaningful,  as we celebrate the 200th anniversary of the War of 1812 and the events that led  Francis Scott Key to pen our National Anthem.

The third day of the Reunion began with our annual business meeting, held at the Little Falls Meeting House. The afternoon provided an opportunity to celebrate the Quaker Heritage of the family as many of the local sites of significance to the early Quaker community in the area were open for tour as part of the 275th anniversary of the Little Falls Quaker Meeting. One of the sites included a home originally owned by a Hollingsworth family that is believed to have been a site on the Underground Railroad. The day concluded with a wonderful dinner at the Main Street Tower in Bel Air.

On Sunday morning several reunion goers attended the Little Falls Meeting for Worship, and at 1:30 Dr. Charles Cherry, Professor of English, Villanova University, Friends Historical Association, spoke on “William Penn, Man of Peace.” As always, a great time was had by all.